How many times have you wondered ‘What is Latin’? Is it alive or dead, useful or not, a beautiful or ugly language, interesting or boring, not to mention whether it is Catholic, classist or fascist? These are but a few of the adjectives associated with Latin, which, if nothing else, show just how difficult it is to define this language in a precise and impartial way. Also because the effort spent in choosing the most appropriate adjective often detracts from the fundamental point, from the quid, as Cicero would say, which is to say from the noun, from Latin.
To start, Latin is a language. A language, every language, presupposes a community of speakers. Those who spoke Latin were the Latins, the ancient inhabitants of Latium, or, more precisely, the Romans.

The Roman Empire fell in 476 AD, but Latin survived by transforming itself. All living languages change over time, and Latin is no exception. Slowly it transformed, and from it the Romance languages were born: Italian, Spanish, French, Portuguese, Romanian and some others. The death of Latin, understood as a language spoken by a community that acquires it through oral transmission, alive and direct, from parents to children, is placed by scholars between the seventh and tenth centuries, according to geographical areas: in any case, centuries after the end of the Roman Empire. Therefore, in our attempt to define Latin, we can certainly say that at some point Latin died, which is to say it became a dead language, devoid of native speakers. Dead, however, does not mean it disappeared.
In fact, people of culture continued to use Latin, which, among its many advantages, also offered that of immutability. Live languages, as was stated previously, change; dead languages, do not. In a Europe where the individual states were slowly assuming their geographical, political and linguistic form, Latin represented the element of unity, not only linguistic, but also cultural and religious. Of course, Latin was now learned from books, no longer in the domestic space of the house, and it was learned to discuss every discipline, the trivium and quadrivium as people of the Middle Ages would have said, and not to go shopping; but still it was Latin. In this sense, we can also say that Latin continued to be a living language, as the men who used it communicated, by voice or in writing, vital contents: thoughts, theories, feelings, etc. 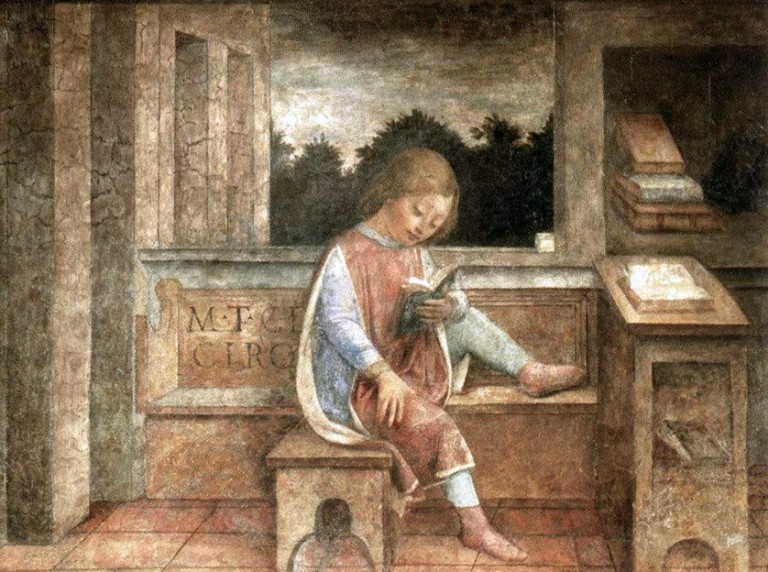 In short, at a certain point Latin began to be both alive and dead; or, better yet, after its historical death it resurrected to become culturally immortal. The main creators of this immortality were the humanists of the fifteenth and sixteenth centuries. Who, re-appropriating the ancient texts in a more profound way than the medieval scholars had done, felt that they were a part of a historical, cultural and spiritual path, which, sinking its roots in classical antiquity, now bore the most ripe fruits in a rich synthesis of Christian and classical tradition, of which Latin (but in large part also ancient Greek) was the lifeblood. They could establish a direct conversation with the ancients (consider, for example, the letters Petrarch wrote to Cicero, Seneca, Quintilian, Horace, Virgil, etc.) and with contemporaries, who modelled their Latin on that of the ancients, reasonably updating the lexicon whenever there was need: the world in which they lived, in fact, the stage on which they moved, in the words of Erasmus, was obviously very different from the curia and from the rostra of Cicero.
This international community of intellectuals, this republic of letters, of which the scholars were proudly and consciously part, reaches the contemporary age, and allows us to integrate our definition of Latin, as a language once alive, then dead, and, finally, as a means of transmitting knowledge and culture. In short, a historical language that spans the centuries, making its way to us.
The definition of Latin as a historical and cultural language is naturally sewn, I would say, with what we have said to be the reason for this online blog on Latin, and, more generally, with the two elements that seem to us to stand out in the human being: historicity and rationality.
The events of recent decades, pertaining more to the daily news than to history, with the practical abandonment by the Catholic Church of the use of Latin in the liturgy and the reduction, in many school curricula, of the hours devoted to the study of Latin, do not in any way invalidate the definition we have given. On the contrary, it seems to us that they confirm it, and that they confirm what others have affirmed, that is, that our age does not have a deep sense of history and has given itself over more to emotion than to reason.
Roberto Carfagni
(Translation by Jessie Craft.)